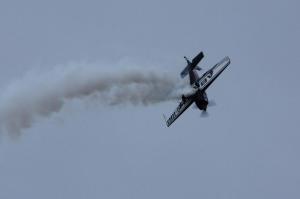 Firstly the FAI rules for the event.

The next World Air Carnival encompassing the World Air Masters venue has not yet been allocated.

The WAM is a FAI class 2 sanctioned event. Rules here.

Some of the best International pilots have been invited to attend. Flying will take place twice a day in two, 2.5 hour sections.

The flying will consist of solo unlimited aerobatics racing through the pylons against the clock then 2 ship, 3 ship, 4 ship and 5 ship formation team demonstrations. The tempo will be slowed down and a demonstration of para motors streaming smoke and ribbons allowing the aircraft to refuel and prepare for the second section of each show.

A demonstration of Banner towing by Aviad will take place prior to and during the show.

The high speed action then returns with a demonstration “bomb dropping” where a bomb is dropped on a target, ground based pyrotechnics will simulate explosions on the target.  Also as part of the show skywriting/ skytyping with smiling faces, hearts and kisses.   Tail chasing, air combat streaming smoke will grace the skies.