On their maiden visit to India, daredevil aerobatic pilots Mark Jefferies and Tom Cassells had a close shave that petrified them. No, it was not a technical snag or coordination problem, but a bird.

During their show at the ongoing India Aviation 2014 here, they came as close as two feet to a bird, “It would have been the end of the show for us,” said Mr. Jefferies of the Mark Jefferies Air Shows and Display Aerobatics. “This was a unique problem here since the airport is in the city but we managed.” Mr. Cassells, was quick to add: “The crowd response here has been overwhelming and we never expected it to be this way.”

Both pilots from the United Kingdom have become a celebrity of sorts at the air show. They are mobbed by those who want to get a picture with them. Their show in the morning and again late evening has been a scene-stealer in the last few days.

Considering the kind of manoeuvres the duo performs, one would expect the two to adopt a slew of special measures before a show. “We just eat good and healthy, and drink lots of fluids… We can even have a heavy meal just and go ahead with the show,” chuckled Mr. Jefferies. Mr. Cassells said, “I can even take calls and talk to people while am in the middle of a performance.”

In a first, the pilots unveiled their unique synchronised smoke act and plan to repeat it in future shows. 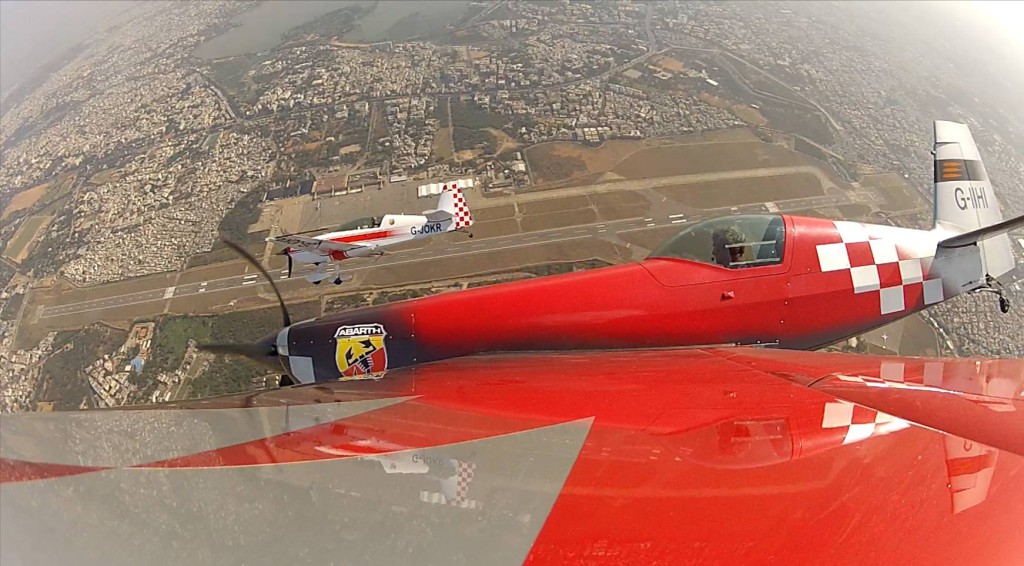 Mark Jefferies commented, “This has been a wonderful experience and it has been a great pleasure for Tom and I to perform our aerobatic air displays at the India Aviation air show. I was also a world first for our synchronised smoke technology that brings a new dimension to our air display sequences.. the people here have been very welcoming and seem to have enjoyed our extreme sport, we’d very much like to come back. Thank you Hyderabad!”

Daredevil pilots Mark Jefferies and Tom Cassells from UK enthralled the public with their stunning manoeuvres and unique “synchronized smoke acts” on the last day of the India Aviation show 2014 that concluded on Sunday at the Begumpet airport.

The Times of India said :- HYDERABAD: It was a role play that Hyderabad is unlikely to forget soon. With the sky as the stage and Mark Jefferies’ mean machines as actors, the aerobatic show on Day 1 of the India Aviation-2014, which opened to business delegates on Wednesday, was a runaway hit. So was the special appearance made by the glamorous Airbus A380 from the Emirates’ fleet. Together, the two ensured that the five-day event took off to a magnificent start.

Though the tension among the spectators on ground was palpable all through the 15-minute display, during which the two pilots swirled and somersaulted their aircraft in mid-air, the crowd broke into a thunderous applause soon after the curtains came down on the matinee. The reactions were much the same during the repeat telecast later in the day. “It was breathtaking,” said one of the spectators, echoing the common sentiment among the gathering which stared awe-struck at the sky, which the two pilots turned into their playground. The Jefferies’ pilots are scheduled to display this act twice a day till the end of the event.

The five-day event witnessed the participation of about 250 exhibitors related to the aviation industry including major ones like Airbus, Boeing, Bombardier and Rolls Royce. About 18 aircraft were displayed as part of the event which included the Airbus A380, the world’s largest passenger aircraft and Boeing Dreamliner.

The number of business visitors on the first three days of the event was around 5,000. The last two days saw a large turnout of general public. While on Saturday around 8,000 people visited the show, on Sunday the number almost doubled to 15,000.

The highlight of the event was the aerobatics show, which returned with this edition.

The event was organised by FICCI and Ministry of Civil Aviation, Government of India.

The theme of this edition was “enhancing air connectivity”. The next edition of the Aviation Show will be held in the year 2016 from March 16 to 20.